America has Turned Into an Orwellian Nightmare 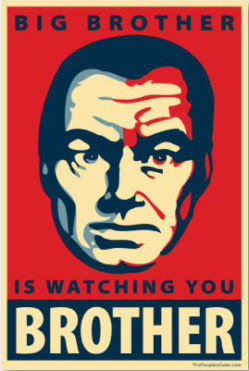 [The following article was published on this OUTPOST in 2012. I republish it here to show that we shouldn’t be surprised by the current move by government for total control and lockdown. It has been developing and being planned for decades. But clearly, most Americans were not ready to face the fake “plandemic.” Very few Americans have done their due diligence to know how to deal with government tyranny of this magnitude. Most Americans are still looking to government for help – as if government is interested in fixing the problem. This, in spite of the fact that government is the source of the problem, and will not be the remedy. You might want to ask yourself if you’ve done enough to learn and prepare for government intrusion and oppression like we see today. Please consider this article from eight years ago. You can see how plans were already being made. But did we pay attention?  -ed]
———————————-
2012 – Big Brother Is Watching You

Let me begin by saying that most Americans don’t have a clue just who George Orwell was or what an Orwellian nightmare means. We have been dumbed down to such a state of ignorance that government tyranny is easily facilitated.

Before the early 1970s most Americans did not have a photo ID. Pictures were not on driver’s licenses. You could board airplanes without ID and you, along with your luggage, were never searched. You could travel the roads unmolested without those sobriety checkpoints. Cops were never searching bags in city subways.

Taxes and bogus fines did not rise to the level of slavery like they do today. There were no photo radar and red light cameras generating millions for private contractors that kick back cash to politicians campaigns.

Entrances into government buildings did not have security checkpoints. There were no surveillance cameras and cellphones that kept a total history of every call you ever sent or received. There were no black boxes in your car to tell government agents about your driving habits (like OnStar).

If police stopped anyone it was painfully slow for cops to even get driving or criminal histories. Now they have instant digital access. Stores did not have shopper’s cards recording every cash purchase you make. Credit cards were not often used and there was no such thing as a debit card.

The military was precluded from engaging in law enforcement practices against Americans on our own soil. You could not be detained by government without probable cause that you committed a crime and even then you had a right to bail, lawyers and Due Process of law.

There were much fewer search and seizure exceptions allowed by court decisions. The failed Drug War turned out to be a lame excuse to invade liberty and privacy.

Today we have the Patriot Act that brings additional draconian provisions every time Congress meets.

Some people say the threat foreign terrorism changed all that. That’s simply a bold face lie! We had a Civil War and two World Wars and never suspended civil rights. Okay our President, Franklin D. Roosevelt, allowed the roundup and detention of Japanese and some German Americans during World War Two. That was beyond disgraceful and un-American. But of course Roosevelt became a curse on America and fundamental freedom.

Now, a new Berlin Wall of sorts is being erected to prevent Americans that owe taxes from travel outside of the USA. I guess jailing and shooting anyone trying to leave is next.

Since the 1970’s we have surrendered so many civil rights and our privacy to despotic politicians. The judges they appointed do not protect Americans from utter tyranny.

Folks we are in a full-blown police state complete with Gulags and non-stop construction of yet more places to detain yet more Americans. If you think this is somehow necessary you’ve either been brainwashed or you are incredibly stupid.

What will it take for Americans to stand up and reject this horror? We have become a nation of cowards and fools. It’s only a matter of time before this nightmare invites a crisis of biblical proportions. We must do something while we still can.