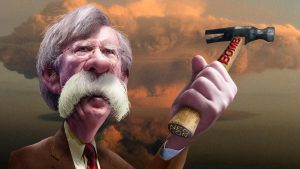 Trump apparently asked for Bolton’s resignation from his post as National Security Advisor. Who knows why Trump wanted rid of him, but lots of people are relieved to see him gone. Bolton is a little evil man with a big ego – his finger constantly reaching for buttons to launch big bombs. He is a very distasteful person. His main objective was to bomb Iran – plus any other target Netanyahu pointed him toward. I should think that Iran and several other countries are happy to see him go.

Trump tweeted, “I informed John Bolton last night that his services are no longer needed at the White House. I disagreed strongly with many of his suggestions, as did others in the Administration, and therefore I asked John for his resignation, which was given to me this morning. I thank John very much for his service. I will be naming a new National Security Advisor next week”

Trump has brought nothing but bad apples to his staff, and Bolton was one of the most rotten. He was a huge liability to the Trump regime, and will not be missed.

Now it remains to be seen what kind of replacement Trump has in mind. Given his selection record thus far, I don’t hold out much hope for a peaceful or sensible replacement.