Children are killed by American weapons in Yemen every year. Then a refinery blows up, and America suddenly pays attention 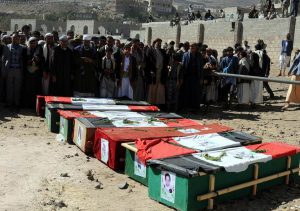 What’s the difference between 10,000 people killed in air strikes and a few missiles taking out an oil processing facility for a few days?

The answer is no laughing matter.

The difference is that only the one which threatens the markets will “not be tolerated” by the Trump administration.

For more than four years, the people of Yemen have been relentlessly bombed back to the Dark Ages by a Saudi Arabia-led coalition, reckless, to put it charitably, about where its aircraft drop their payloads.

Forty-seven fishermen here, 137 funeral mourners there, a 20-strong wedding party and, in one year alone, 443 children.

Forty-four of these children were on a bus on a summer school trip into Saada when their vehicle was hit by a stray missile in August 2018.

A video taken by one of the boys showed them laughing and playing on the bus shortly before it was hit.

When, a week later, US Secretary of State Mike Pompeo found himself meeting the Saudi Crown Prince Mohammed bin Salman, no mention was made of the day the children died.

Their deaths were not deemed important enough for America’s top diplomat to bring up with the de-facto ruler of Saudi Arabia, whose planes were responsible.

Fast forward a year, to the missile strikes on Saudi oil fields last weekend, attributed by many to Iran or its proxies.

At the time it was said that 18 drones and seven missiles had knocked out half of Saudi Arabia’s oil production and the world should brace itself for soaring fuel prices in the wake of an anticipated fall in supplies.

The loss of 5.7 million barrels a day—about fifty percent of Saudi’s output and five percent of the world’s daily production—was said to have caused the “biggest oil disruption in history.”

Sure enough, Monday saw the biggest hike in the price of oil for a decade, 14 per cent, and a miserable future for travellers was predicted with rises in air fares of 15 per cent expected.

Step forward the same Mike Pompeo to declare the drone-strikes an “unprecedented attack on the world’s energy supply” and an “act of war.”

“The Iranian regime’s threatening behaviour will not be tolerated,” he stormed.

Not one person dead, no one injured. Not even a scratch. And, lo and behold, by Wednesday the Saudi energy minister was saying that half the oil production which had been knocked out had been recovered.

Not only that, but production capacity at the plants would be fully restored by the end of the month.

Now, I’m not going pretend that an attack on the Saudi-Aramco oil refineries should not be condemned. Of course it should.

But what’s shameful and depressing is how the prospect of the world’s energy market being thrown into disarray for a few days counts for so much more than a four-year war which has caused the world’s worst humanitarian crisis.

The knock-on effects of the conflict have left millions, including 85,000 children, facing disease and on the brink of starvation.

Where is America’s condemnation of that? Where is the outrage? What is the world coming to when a wobble on the oil markets is deemed so much more important than thousands of men, women and children being killed as they innocently go about their daily lives?

And yet these are the priorities of leaders in the West as demonstrated by their use of words, by what they choose to condemn and what they’re happy to let pass.
An analysis of debris from the school bus site showed that the 227kg laser-guided bomb used in the attack was made by Lockheed Martin and sold to Saudi Arabia as part of billions of dollars of US weapons exports.

That is one reason that Pompeo would not criticise the Saudis and why, just a few months later, President Trump, by his own admission, was so soft on the Riyadh leadership in the wake of the killing of Jamal Khashoggi.

But while America, to safeguard jobs and political capital at home, continues arming Saudi Arabia with weapons that are used to killed children, there will be people prepared to say what Pompeo should have said.

Even it’s a lone protestor, Bryce Druzin, 34, who spray painted the word ‘Yemen’ in blood red across Lockheed Martin’s Advanced Technology Center in Palo Alto, California, alongside the date of the slaughter.

Human life should always matter more than the price of oil.