Evidence That Jesus As A Youth Visited England 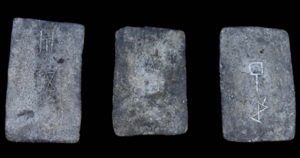 Researchers have made an astonishing discovery that is transforming our understanding of the Bronze Age . They have established that ancient tin ingots found in Israel actually came from what is now modern-day Britain. Experts believe that they have found proof that tin was traded over long distances some 3,000 years ago. Moreover, the researchers may have solved the mystery of the origin of the tin that was so vital for Bronze Age cultures.

Researchers in Heidelberg University and the Curt Engelhorn Centre for Archaeometry in Mannheim have been investigating the origins of the tin ingots from the Bronze Age. They were discovered by marine archaeologists off the coast of Israel.

According to Phys.org, the researchers used “lead and tin isotope data as well as trace element analysis” to identify where the metal was originally mined. What they found was totally unexpected.

Tin From the British Isles

The researchers established that the “3,000-year-old tin ingots found in Israel are actually from Cornwall and Devon” reports the Daily Mail . These areas are in southwest Britain and were the sites of tin mines until modern times. The experts then analyzed tin ingots that were found in Greece and Turkey and they discovered that they had come from Devon and Cornwall.

Tin was essential in the Bronze Age . This is because bronze is an alloy of copper and tin. The ability to make bronze transformed societies and the technology to make the metal was distributed all over the Middle East, Europe, and Asia. The Angle News quotes Dr. Ernst Pernicka, a retired professor from Heidelberg University, as stating that “Bronze was used to make weapons, jewelry, and all types of daily objects , justifiably bequeathing its name to an entire epoch”.

However, deposits of tin are very rare in much of the Middle East and the Eastern Mediterranean. The question that arose for archaeologists was where did the tin originate from that was used to make bronze?

The source of the metal has been a mystery for decades and some have argued that it came from Central Asia. The researchers, based on their findings, believe that they have solved this mystery. Dr. Daniel Berger stated that, These results specifically identify the origin of tin metal for the first time. 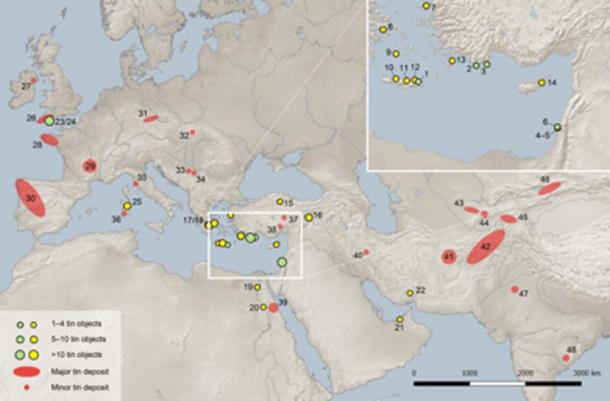 Map of Eurasia showing the locations of the tin ingots mentioned in the study (green dots), other tin objects in the eastern Mediterranean and the Near East before 1,000 BC (yellow dots), and major and minor tin deposits.

Based on the findings it seems that the tin was formed into ingots and exported from Devon and Cornwall. Given the limited technology at the time and the lack of roads, the most plausible way for the ingots to have reached modern-day Israel was by sea.

It seems that “the British Isles had developed maritime trade routes with the rest of the world as early as the Bronze Age .” These trade routes were probably very complex and covered great distances.

Tin was essential for societies in the eastern Mediterranean and there would have been a great demand for high-quality tin, and this would have encouraged the development of international trade routes. This could have led mariners to travel great distances to secure the metal.

The trade in tin ingots was probably very dangerous but also very profitable. Other materials that were likely traded along these international trade networks were amber, copper, and luxury items . The fact that Bronze Age merchants could trade over vast distances shows that they were proficient sailors.

The findings of the research are very important and allow us to have new insights into trade in the distant past. It identifies for the first time the origin of the tin, that was so important in the Bronze Age. It strongly indicates that international trade was much more advanced, 3,000 years ago, than widely supposed. The results could also guide archaeological research in the future.

Did Jesus As A Boy Visit England With His Uncle Joseph of Arimathea – A Tin Merchant?

Few people know that England’s de facto National Anthem Jerusalem is based on that very question. Here is the first stanza speaking of Jesus ( the “Lamb of God”) :

And did those feet in ancient time.
Walk upon England’s mountains green:
And was the holy Lamb of God,
On England’s pleasant pastures seen?

Artist and poet, William Blake,  wrote the poem, And Did Those Feet In Ancient Time? in 1808.  Over a hundred years later, in 1916, England’s poet laureate, Robert Bridges, plucked the poem from its bin of historical obscurity for a collection of British poetry.  Composer Hubert Parry  in the same year set the poem to music. It has been known as “Jerusalem” ever since.

The song has since become a staple of modern British culture, sung at the recent Royal Wedding and at the funeral of Princess Diana, It has been featured in a number of movies and television works, including the Academy Award winning picture, Chariots of Fire  The picture derives it name from the celebrated chorus in the song.

Few people, even few Brits, realize  that this song celebrates the story that Jesus as a young boy traveled to England. This trip was made with his uncle, Joseph of Arimathea, a  tin merchant and Mary’s brother. These would have been business trips to England. The only mentions of Joseph of Arimathea in the Bible are  in association  with providing the tomb for Jesus’ body. The Bible is largely silent on Jesus from childhood to public ministry.

This legend  has been alive  for almost 2000 years. Further legend believes that  Joseph of Arimathea returned after the death of Jesus and started the first  “cristen” church of England in the village of Glastonbury  around  60  A D.

Joseph decided upon Glastonbury because when he thrust his staff into the ground on Wearyall Hill, above Glastonbury, it took root and flowered. This tree is known as the Glastonbury Thorn . A descendant of that first tree still stands and  blooms small white flowers twice a year.

For the last hundred years, it has been a royal tradition for the  King or Queen of England’s  family  to celebrate Christmas dinner with a bough of blooms from the Glastonbury Thorn on the table. The bough is cut every year  at Christmastime by the oldest child in the second grade in the Glastonbury school system. 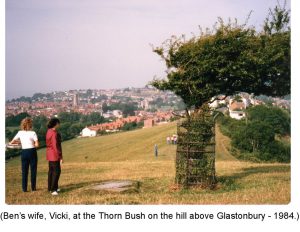