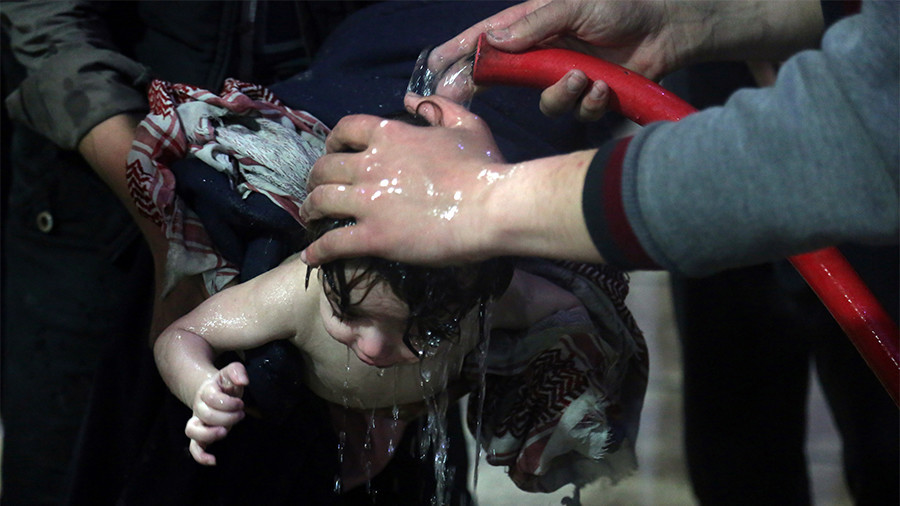 A child is “treated” in a hospital in Douma, eastern Ghouta in Syria, after a claimed chemical attack April, 7, 2018. Notice that so-called professionals are not wearing protective gloves. They are not washing poison chemicals. They may be washing smoke contamination caused by a fire. Or possibly it is just a poorly staged show.

Moscow has “irrefutable proof” that the alleged chemical incident in Syria’s Douma was a “false-flag attack,” orchestrated by UK security services with support from the United States, said the Russian envoy to the OPCW.

“We have not just a ‘high level of confidence,’ as our Western partners uniformly put it; we have irrefutable proof that there was no chemical attack in Douma on April 7,” Russia’s Ambassador to the Organization for the Prohibition of the Chemical Weapons Aleksandr Shulgin said at a special meeting of the UN chemical watchdog’s executive council. The diplomat added that the incident had been a “pre-planned false-flag attack by the British security services, which could have also been aided by their allies in Washington.”

“Things unfolded according to the pre-written scenario prepared by Washington. There’s no doubt, the Americans play ‘first fiddle’ in all of this,” Shulgin said, adding that the “attack” was staged by “pseudo-humanitarian NGOs,” (the “White Helmets” are NATO-sponsored NGOs, adversaries of the Syrian government).

Syrian and Russian experts claim that the ‘chemical attack’ was a false flag provocation to justify the US airstrike.

The Russian Defense Ministry has presented what it says is proof that the reported chemical weapons attack in Syria was staged. It also accused the British government of pressuring the perpetrators to speed up the “provocation.”

During a briefing on Friday, the ministry showed interviews with two people, who, it said, are medical professionals working in the only hospital operating in Douma, a town near the Syrian capital, Damascus.

The two men reported how footage was shot of people dousing each other with water and treating children, which was claimed to show the aftermath of an April 7 chemical weapons attack. The patients shown in the video suffered from smoke poisoning and the water was poured on them by their relatives after a false claim that chemical weapons were used, the ministry said.

“The Russian Defense Ministry also has evidence that Britain had a direct involvement in arranging this provocation in Eastern Ghouta,” the general added, referring to the neighborhood of which Douma is part. “We know for certain that between April 3 and April 6 the so-called White Helmets were seriously pressured from London to speed up the provocation that they were preparing.”

According to Konashenkov, the group, which was a primary source of photos and footage of the purported chemical attack, was informed of a large-scale artillery attack on Damascus planned by the Islamist group Army of Islam, which controlled Douma at the time. The White Helmets were ordered to arrange the provocation after retaliatory strikes by the Syrian government forces in response to the shelling from terrorists.

The UK rejected the accusations, with British UN Ambassador Karen Pierce calling them “grotesque,” “a blatant lie” and “the worst piece of fake news we’ve yet seen from the Russian propaganda machine.”

One of the interviews published by the ministry showed a man who said his name was Halil Ajij, and who said he was a medical student working at Douma’s only operational hospital. This is how he described the origin of the footage:

“On April 8, a bomb hit a building. The upper floors were damaged and a fire broke at the lower floors. Victims of that bombing were brought to us. People from the upper floors had smoke poisoning. We treated them, based on their suffocation.”

Ajij said that a man unknown to him came and said there was a chemical attack, and panic ensued. “Relatives of the victims started dousing each other with water. Other people, who didn’t seem to have medical training, started administering anti-asthma medicine to children. We didn’t see any patient with symptoms of a chemical weapons poisoning,” he said. 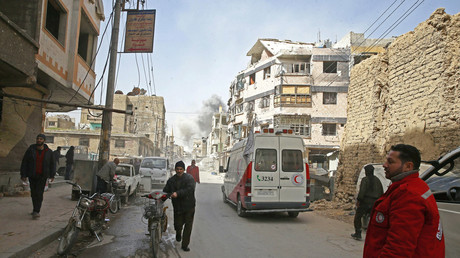 ‘They can go anywhere they want in Douma’: OPCW team arrives in Syria to investigate alleged attack

The first photos claiming to show the aftermath of the alleged chemical attack on April 7 were published online on the same day, and featured the bodies of many people, including children, some with foam around their mouths and noses. Footage from the hospital was released on Sunday, with the sources behind it claiming that it had been shot on Saturday.

Konashenkov said Russia hoped that international monitors from the Organization for the Prohibition of Chemical Weapons (OPCW), which is due to investigate the circumstances of the incident, will help establish the truth. He added Eastern Ghouta is currently trying to return to peaceful life after being liberated from terrorist groups by Syrian government forces. He called on other nations and international organizations to provide humanitarian aid, which is badly needed in the area. Russia is already supplying food, medicine, building materials and other essential supplies to the neighborhood, he said.

Residents of the neighborhood, who previously fled violence, are returning to their homes now that the area is relatively safe, the Russian official said. The latest reports from the ground say about 63,000 people have returned, which is over half of the displaced residents, he added.

The reported chemical weapons attack escalated tensions over Syria, just as Damascus was about to seize full control of Eastern Ghouta. The US and allies such as the UK and France threatened military action in response to what they claim is an atrocity committed by the Syrian government. Russia insists the incident was staged and said it reserves the right to counter any attack on Syria.

RT spoke about the Russian claims with Lord Alan West, a retired officer of the British Royal Navy. He said he had strong reservations about taking allegations against Damascus at face value, because it didn’t make much military sense. 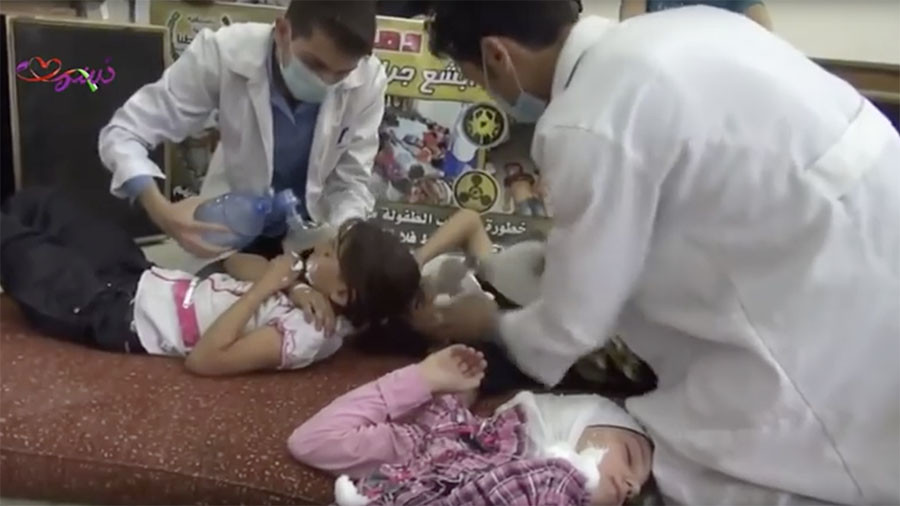 This video shows Syrian children being trained to fake the symptoms of a chemical weapons attack.

RT Digital investigated the origins of the video and found that it is more than four years old and the actions carried out by the children in the video are part of a play by a group called the Nesma Organization based in eastern Ghouta.

Other videos from the Rural Damascus Media have also been shared by the Nesma Organisation’s Facebook page.

Rural Damascus Media’s description of the video reads: “The aim of the play was to teach children the horrors of being under attack by chemical weapons and to show the world its neglect and failure to take action on a man who would use such weapons against his own citizens.”