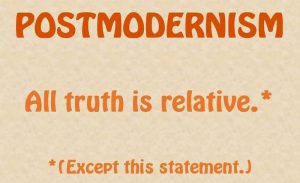 Postmodernism – Introduction
Postmodern philosophy teaches that there is no objective, universal “Truth,” and that moral and scientific beliefs are man’s adaptive tools for achieving happiness. It teaches that we should give up the idea that reality is intrinsic and knowable.

The philosophical ideas of Postmodernism have captured modern-day academia. Today’s college students will find Postmodernism ruling the day in their humanities and social studies courses, prevalent also to some degree, in their science, engineering, and mathematics courses. The Postmodern notion that truth is community-oriented likewise appeals to most church theologians.

While there is no single cohesive Postmodern philosophy (rather, there are several), a few consistent themes emerge from each mainstream Postmodern writer.

Postmodern Philosophy – Subjective Truth
One of the themes in Postmodern philosophy is a denial of universal, objective truth. This is clearly declared in Jean- Francois Lyotard’s famous statement “incredulity towards metanarrative.” A metanarrative refers to a unifying story that seeks to explain how the world is—in other words a metanarrative is a worldview. Lyotard suggests that we should be skeptical of such broad explanations. For example, the statement “God so loved the world” is nonsensical to Postmodernists for two reasons: (1) they deny the existence of God, and (2) statements reflecting the whole world (metanarratives) are impossible.

For Postmodernists, since there is no universal Truth (capital “T”), there are only “truths” (small “t”) that are particular to a society or group of people and limited to individual perception. Written or verbal statements can reflect only a particular localized culture or individual point of view. A well-worn catchphrase we hear in this regard is, “That may be true for you, but not for me.”

Postmodern Philosophy – Language and Deconstruction
Regarding literature, Postmodernists are highly concerned with the language of written texts. The term defining the major literary methodology of Postmodernists is deconstruction. Associated with the work of the French philosopher Jacques Derrida, deconstruction involves reading a text to ferret out its hidden or multiple meanings (polysemy). In this way, a reader’s interpretation of the text becomes more important than the text itself. Also significant is the subjectivity of the reader in determining what the author intended.

In 1968, Roland Barthes wrote a short essay entitled “The Death of the Author.” In this essay he argued that the origin of the text is not the important thing, rather it is the destination—the reader. By allowing the reader to invent new meanings, the text is freed from the tyranny of the author’s single intended meaning.

For example, there is no reason to assume “that a Shakespearean play means exactly the same thing today as it did when first performed.” Each author (or artist) is the product of his or her own cultural setting and uses language to fit his or her condition. Thus, Postmodern literary criticism claims that words never describe the objective world but only refer to other words. Therefore, no matter how a writer constructs a sentence, it can never tell us about the real world, but only about the world as perceived by the reader. This concept is summed up in the phrase, “That’s just your interpretation.”

Postmodern Philosophy – Anti-Realism and the Construction of Reality
The concept of deconstruction in Postmodern philosophy is taken far beyond the area of literature. Just as you, the reader, are creating the meaning of this text, you also construct the world according to your culture and experiences. In other words, there is no “real world” out there—only six billion constructions of the world, a belief known as anti-realism.

Traditionally, Truth (with a capital “T”) was understood as the relationship between the real, objective world and statements that correspond to the real world. This view is called the correspondence theory of truth. However, Postmodernists claim this kind of Truth is impossible to achieve. There is no universal “Truth,” only personal, subjective truths that exist only in a particular situation or cultural surrounding. Thus, according to the Postmodernist paradigm of anti-realism, there is no real world to which truth can correspond. Rather, our words correspond only to other words and, in the end, create our own understanding of reality. If words signify only other words, then words can never be used to discover Truth.

A classic example of the concept that words do not refer to reality is found in Foucault’s essay entitled, “This Is Not a Pipe.” In this essay, he analyzes a 1966 painting by Magritte that shows a picture of a pipe on a blackboard with the written phrase “This is not a pipe.” Above the blackboard is an abstraction of a pipe hanging in the air. Foucault insists that none of these is a pipe, but merely a text that simulates a pipe.

The primary idea behind this “word play” is the Postmodern insistence that all human beings are conditioned by their culture and language—their situation in life—and that no one is able to break through his or her situation to engage a universe with objectively true statements of fact. ‘Water is wet’ is true for only a small community of individuals locked in their own language and culture. In addition, it is true only as long as this community agrees upon this particular usage. In fact, the community determines what is truth through the words it chooses to use.

Richard Rorty has said that truth for him is whatever his community of scholars allows him to get away with. If Rorty says the moon is made of green cheese and his community does not disagree with him, then for him the moon is made of green cheese. Again, reality is not what objectively exists; reality is produced by our agreement of what it is. We do not discover true facts about the real world—we create it.


Ben’s notes – Conclusion
Objective “Truth” does exist. Truth is not subjective or relative. Truth is truth. Two plus two always equals four. Postmodernism’s concept that individuals and cultures can have their own truths (I’m OK! You’re OK!) is the lie of the ages – that one person’s truth is as good and as viable as the next person’s.

Postmodernism, in essence, is the lie that the serpent philosopher (probably a politician or theologian) sold to Eve and Adam. It teaches that we each are “as gods” with our own natural ability to “know good and evil” (Genesis 3:5). This was the philosophy used to try to tempt Jesus (Matthew 4:1-11). Peter also warns us (1 Peter 2:16).

Postmodern Philosophy is the mental absurdity (curse) that has infected modern society. It is a natural result of rejecting God. It cripples men’s minds so that they are unable to think clearly.