THE GREATEST WEALTH TRANSFER IN HISTORY

Truth From An Unlikely Source

The coronavirus pandemic and corresponding lockdown made way for “one of the greatest wealth transfers in history,” CNBC’s Jim Cramer said Thursday.

The stock market is rising as big business rebounds from state-ordered stoppage of nonessential activity, while small businesses drop like flies, the “Mad Money” host said.

“The bigger the business, the more it moves the major averages, and that matters because this is the first recession where big business … is coming through virtually unscathed, if not going for the gold,” he added.

The comments come after the Dow Jones Industrial Average ticked up almost 12 points to 26,281.82.

Despite the ongoing economic woes, the S&P index of 500 large-cap companies, which is considered a benchmark for the stock market, is within striking distance of its levels from the start of the trading year. Since bottoming near 2,191 in March, the index is up about 42%.

The tech-heavy Nasdaq 100 has recovered all of its losses from the coronavirus meltdown and set a new high on Thursday.

In order to help small businesses make it to the other side of the pandemic, the federal government needs to pass another stimulus package, given the social distancing mandates that remain in place, he added. The American Bankruptcy Institute said Thursday that U.S. Chapter 11 bankruptcies in May ballooned by 48% compared to a year ago.

“That’s that pesky real world asserting itself, but the only big bankruptcy we’ve seen in the stock market is Hertz,” Cramer said.

Cramer said it still only scratches the surface of what impact the halt in global economic activity will have on the country.

The Senate on Wednesday sent a bill to be signed by President Donald Trump to relax rules on how businesses can spend relief funds provided by the Paycheck Protection Program.

[The government is giving million$ to large businesses to keep them afloat.]

“The companies that took the money just got a big break: they only need to spend 60% on their employees to get the loans forgiven, down from the original 75%. That’s important, as most small businesses fail because they can’t afford to pay the rent,” Cramer said.

ed. – Here is a mainstream news article that says what I’ve been saying. The COVID scamdemic is robbing the 99% and enriching the 1%. Panics and national emergencies like wars, financial bubbles, and events like 9-11 always hurt the smaller businesses to help the big businesses by transferring wealth to the big corporations, bankers and billionaires who are in cahoots with government.

Billionaires, like Jeff Bezos (Amazon.com), Mark Zuckerberg (Facebook), Elon Musk (Tesla Inc.), and others in the top tier of the wealthiest 1% saw their fortunes grow at unprecedented rates over the past couple months while record numbers of small businesses went bankrupt. 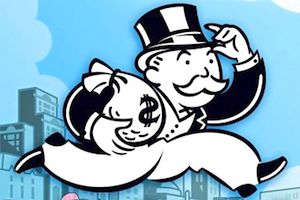 This should tell us something about the nature and orchestration (who/what is behind the absurd and mysterious lock down). Who has something to gain from the fake pandemic? Who is behind the unreasonable orders of the governors and the president? The unfailing rule that always reveals the culprits is to ask “cui bono” (who benefits)? Who gains from our losses?

For two months we have watched the ridiculous show. But now our attention is being diverted away from the “pandemic” over to the riots and protests breaking out across the nation. People are suddenly focused on Black vs White racial issues and/or Republican vs Democrat issues. These distractions have taken center stage. And they are being tolerated, and even facilitated, by state and national authorities (the police and military – either of which could put a stop it anytime they wanted). The riots serve the purpose of taking people’s attention away from the big original culprits (the governments, news media, and big pharma) who caused the worldwide shutdown. By creating the fake COVID pandemic they fomented national unrest and anger. Now the cities are fighting racial and political issues while the big culprits are in the background planning their continuing transference of wealth by ruining small business and empowering the top 1%. This is all being orchestrated by the government, assisted by the media, to increase their power and control over the people.