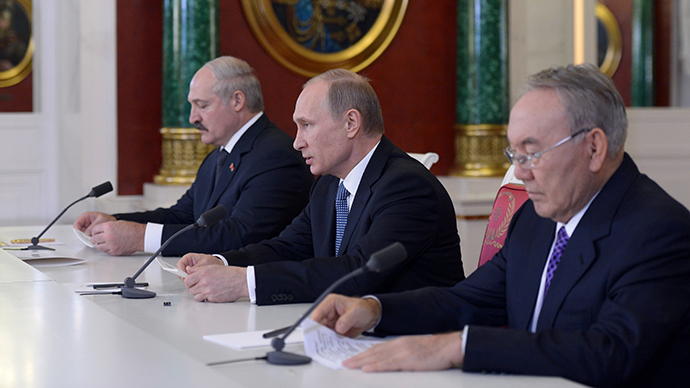 Presidents Vladimir Putin (center) of Russia , Alexander Lukashenko (left) of Belarus and Nursultan Nazarbayev (right) of Kazakhstan making a statement for the press after the end of the Supreme Eurasian Economic Council meeting in the Kremlin on December 24, 2013.

Russia, Belarus, and Kazakhstan signed the historic Eurasian Economic Union which will come into effect in January 2015. Cutting down trade barriers and comprising over 170 million people it will be the largest common market in the ex-Soviet sphere.

The troika of countries will cooperate in energy, industry, agriculture, and transport.

“In fact, we are shaping the largest common market in the CIS, with huge production, scientific and technological potential and enormous natural resources,” the President added.

Citizens of Russia, Belarus, and Kazakhstan will have the right to work freely throughout the member states without having to be issued any special work permits, Putin said.

Belarus and Kazakhstan are in third place in foreign trade with the Russian Federation, after the EU and China, Putin said.

The Russian leader said that the document brings Russia, Kazakhstan and Belarus to a new level of integration yes lets each individual state fully retain its sovereignty.

“We ensure a close and coherent economic collaboration and cooperation. Today we have created a powerful and attractive center of economic development, a large regional market that brings together more than 170 people. Our union has huge reserves of natural resources, including energy, which accounts for one fifth of the world’s gas reserves and 15 percent of oil reserves,” Putin said. “A new geopolitical reality of the 21st century is born,” Kazakh President Nursultan Nazarbayev said shortly after the final treaty was signed by the three leaders.

“We see this as an open space and a new bridge between the growing economies of Europe and Asia,” Nazarbayev added.

David Gray, head of PricewaterhouseCoopers, Russia, said he hoped improving trade will help boost investment, as in the EU.

“If you look at the EU, for example, the reduction of trade barriers within the EU had a significant impact in terms of doing business, which does encourage investment. And I’m looking forward to similar results in terms of the Eurasia deal,” Gray said while speaking to RT at the St. Petersburg Economic Forum on May 24.

However, Kazakh President Nazarbayev warned members to try and avoid repeating the mistakes of the European Union, which is still facing grave economic consequences from the continent-wide recession.

“The point is that none of the participating countries were subject to de-industrialization, and traditional industries did not suffer. Lessons from the European recession are in this,” Nazarbayev said.

Belarusian President Lukashenko hailed the signing, but said there was still major work to be done in areas of bilateral trade.

“We believe the Economic Union will be the foundation for the future of political, military, and humanitarian unity,” he said.

The Customs Union is a project to gather ex-Soviet states into a free trade zone to rival the European Union. The three member states of Russia, Belarus and Kazakhstan only comprise 2.5 percent to the Earth’s population, but account for 15 percent of the total land.

“The geographical position permits us to create transport, logistic routes of not only regional, but also global importance that permits attracting massive trade flows in Europe and Asia,” Putin said ahead of the signing ceremony in Astana, Kazakhstan on Thursday.

All member states will retain full state sovereignty. Russia is financing the lion’s share of the administration, but each state will have a one-third voting status.

“The Eurasian Economic Union will operate on universal transparent principles understood by all, including standards and principles of the WTO,” Putin said.

The idea of creating a regional trading bloc was first suggested by President Nursultan Nazabayev of Kazakhstan back in 1994, when he gave a speech at Moscow State University. The Customs Union began on January 1, 2010, and started operating under a comprehensive customs code in July 2011.

Commonwealth Independent States (CIS) like Armenia, Tajikistan, and Kyrgyzstan may be brought into the free trade zone later.

Kyrgyzstan plans to join the Customs Union by the end of 2014, President Almazbek Atambayev said at the meeting.

A decision on Armenia’s membership will have to be made by July 2014, Kazakhstan’s President Nursultan Nazabayev said.

Commenting on the fact Ukraine once wanted to join, Lukashenko said sooner or later, the country’s leadership will realize “where their happiness lies”, and what is “right for the Ukrainian people.”

“We lost some [potential member states] along the way. Ukraine started this hard work with us, but it was very difficult for Ukraine,” the Belarusian president said.

Neighboring oil-rich Azerbaijan hasn’t made a decisive move towards either the Customs Union or European Union integration.

Armenia is on course to join the Customs Union with Russia, Belarus, and Kyrgyzstan by January 2015, after signing a “roadmap” in Moscow. Despite declaring its interest only three months ago, it may join earlier than Kyrgyzstan, which applied in 2011.

The news was announced after an official meeting between the heads of state of the three original members and two potential ones. The meeting also included Ukraine, which has observer status. Ukrainian Prime Minister Nikolay Azarov was present at the gathering.

“We welcome the interest in closer co-operation from the non-member states. We have approved the roadmap that will allow Armenia to join the union and the common economic area, and a similar document for Kyrgyzstan is virtually ready,” Russian President Vladimir Putin told reporters.

The Customs Union, which seeks to gather all ex-Soviet nations to form a free trade zone to rival the EU, is the Russian leader’s project.

Armenia’s bilateral trade with Russia, its biggest foreign partner, reached US$1.2 billion in 2012 – a negligible amount for Moscow. Double digit growth has taken place, however, as the Caucasian country of three million people continues to recover from the effects of a severe economic crisis.

Armenia had long negotiated a potential Association Agreement with the EU, similar to the one that has been causing upheaval in Ukraine, but reversed course towards Russia in September.

Among the potential obstacles to effective membership for Yerevan are the lack of shared borders with other member states and the unresolved status of the Nagorno Karabakh region, which is contested with Azerbaijan. A special provision has been included in the roadmap, which will define the status of the region and whether it constitutes part of the Customs Union.

Kyrgyzstan’s signing of a similar roadmap will be postponed at least until the next session of the union in March, following critical public comments made by the country’s president last week.

Almazbek Atambaev told media in Bishkek that the roadmap had been “drafted without Kyrgyzstan’s involvement” and risked subjecting the country to “social problems and instability.”

Belarus and Kazakhstan are also not entirely agreed on the nature of the partnership between the member states, with Belarusian leader Aleksandr Lukashenko calling for wider diplomatic and political integration between the countries during Tuesday’s meeting, and Kazakh leader Narsultan Nazarbaev retorting that the Customs Union “must not become politicized.”

President Putin nonetheless assured that the union is still on course to come into power on the long-declared date of January 1, 2015, with details finalized by May 2014.

“Next we must document the economic obligations of the member states to ensure that they are doing everything to ensure the free economic movement of goods,” said the Russian leader.

“Eventually we are hoping that the amount of exceptions that restrict free trade will be reduced to zero,” he added.