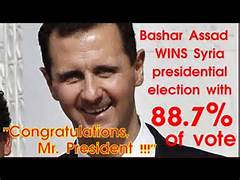 It is absolutely amazing how western politicians and news organizations get away with absurd outright lies and easily-disproved claims such as these … and Americans accept those lies without bothering to check on them. Why Americans trust their mainstream news on TV is beyond me.

Among Syrians, President Assad enjoys a popularity approval rating FAR ABOVE that of any American president. Assad is, without question, the choice of Syrians. He is democratically elected. And yet American politicians (who clamor about supporting democracy) have decided that Assad must go, and his regime replaced with one of the west’s choosing. But why? What’s democratic about that? It’s a joke!

Assad won the presidential election in Syria with 88.7% of the votes. Voters turned out at an amazing 73.4% and there were two other candidates running against him.

Compare that with Obama’s election in 2012. He barely squeaked in with 51.1% of the vote. And total voter turnout was only 55%. The highest voter turnout in America since World War 2 was in 1960 when Kennedy was elected. That year 62% voted, far below the turnout in Syria.

Obviously, the anti-Assad movement is NOT in Syria. It is in Washington DC. … as proven by the following article from June 2014. -ed) 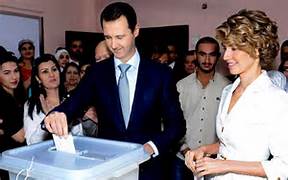 Bashar Assad has won a landslide victory in the Syrian presidential poll with 88.7 percent of the vote. This will secure him a third seven-year term in office amidst a bloody civil war (actually it isn’t a civil war, but an insurgency fomented by the US).

“I declare the victory of Dr Bashar Hafez Assad as president of the Syrian Arab Republic with an absolute majority of the votes cast in the election,” parliament speaker Mohammad Laham said in a televised address from his office in the Syrian parliament.

A total of 10.2 million people voted for Assad. The voter turnout stood at 73.42 percent. No violations have been reported, Syria’s Higher Judicial Committee for Elections said as quoted by SANA news agency.

Syrian officials said the result was a vindication of Assad’s three-year campaign against those fighting to get rid of him.

The other two candidates for the top post were Hassan Abdullah Nouri, from the National Initiative for Administration and Change in Syria, and Maher Abd Al-Hafiz Hajjar, formerly from the People’s Will Party.

Despite the high turnout figures, residents of some areas in the country’s north and east were obstructed from voting by (US-backed) rebel forces.

The conflict in Syria has already killed 160,000 people and created nearly 3 million refugees, as well as displacing more people inside Syria.

But while opposition groups and most countries in the West have denounced the election as a sham, Syrians are supporting President Assad and see him as the only option to return stability to the country.

“This is our duty, we can’t allow people from outside the country to decide for us. Our duty is to vote – or order to protect our country,” Usam Hammami, a resident in the capital Damascus, told RT’s Maria Finoshina.

Russia and Iran both supported the election and Assad himself has said that it is part of his efforts to meet the opposition’s demands.