Mandatory Vaccinations Are On The Way 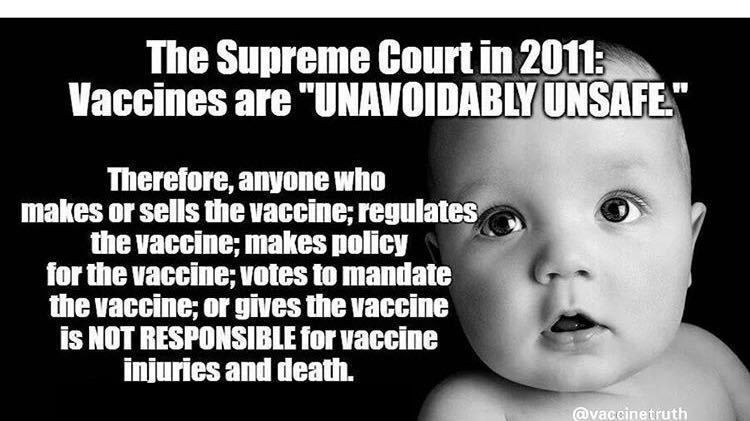 The people who are sheepishly going along with the Covid narrative being pushed by, well, just about everyone are in deep denial about many, many things, not the least of which is the fact that the shadow government controlling this phony narrative is planning to FORCE the American people to be injected with the Fauci/Gates/Trump/Big Pharma/Covid vaccine. Those who refuse the vaccine are going to wake up in a nightmarish world where Freedom no longer exists—a world where the lack of the “mark” (government certificate, voucher or even implanted chip or digital tattoo of some sort) will mean that the freedom of work, travel and buying and selling is almost impossible. And the ones who take the vaccine will be totally controlled and monitored by the state from that day forward.

Virginia State officials are already promising that the corona vaccination will be MANDATORY for all Virginia residents—NO EXCEPTIONS.

State Health Commissioner Dr. Norman Oliver told 8News on Friday that he plans to mandate coronavirus vaccinations for Virginians once one is made available to the public.

Virginia state law gives the Commissioner of Health the authority to mandate immediate immunizations during a public health crisis if a vaccine is available. Health officials say an immunization could be released as early as 2021.

Dr. Oliver says that, as long as he is still the Health Commissioner, he intends to mandate the coronavirus vaccine.

The decision comes after Massachusetts said it would make the flu vaccine mandatory this year as part of a campaign to protect the state’s medical system. We suspect Virginia and Massachusetts won’t be the only states to discuss mandatory COVID and/or flu vaccination in the coming weeks, as the school year begins.

All 50 states now require children to be vaccinated for multiple diseases before they’re allowed to begin kindergarten. California requires vaccinations before kids can attend preschool or go to daycare, with no religious exemptions allowed.

Connecticut forces parents to have their children vaccinated for an astonishing 9 separate potential illnesses.

But get this: Bill Gates, the man who makes billions of dollars profiting from Big Pharma’s vaccines, refused to vaccinate his own children.

Given that the vaccination issue now impacts all families in America, directly or indirectly, you’d think it would have garnered more media attention when it was learned that vaccine champion and Microsoft founder Bill Gates refused to allow his own children to be vaccinated.

This admission came from the Gates family’s personal physician in Seattle, who was speaking behind closed doors with other doctors at a symposium last year (someone at the conference leaked the conversation, so the doctor himself technically did not violate doctor-patient confidentiality rules).

The doctor reportedly told his colleagues, “I don’t know if he (Gates) had them vaccinated as adults, but I can tell you he point blank refused to vaccinate them as children.”

It also seems like Bill Gates and the elites know something about vaccines that the rest of us aren’t being told.

Well, one of the things we aren’t being told is the rampant corruption surrounding the largest vaccine manufacturers.

Under “Operation Warp Speed” the Department of Health and Human Services has allocated around $10 billion to feed into giant multinational multi-billion dollar pharmaceutical corporations – each with a track record of bribery, corruption, market manipulation, and price gouging.

The US Department of Health and Human Services itself is headed by Alex Azar – former president of pharmaceutical giant Eli Lilly – which was accused of manipulating the price of insulin in the US, and fined for doing so in Mexico – Politico reported in its article, “Trump’s HHS secretary nominee boosted drug prices while at Eli Lilly.”

If COVID-19 was truly the danger we are told it is – why has the Western World placed its trust in the most corrupt corporations on Earth? Why do Western governments draw department and ministry heads from these corporations? Why is the development of these vaccines being done in secret by for-profit corporations through the use of proprietary technology rather than as an exercise in open, international collaboration?

Upon seeing examples of the colossal corruption carried out by each of these “Operation Warp Speed” candidates it will become clear that their collective appearance at the trough of $10 billion in taxpayer dollars to develop a COVID-19 “vaccine” is the capstone upon a long, sordid history of profiting at the expense of the general population’s money and even their health.

Six of the eight corporations shown in a table in Forbes’ article are Western pharmaceutical giants. They include:

Four of the six are convicted – not accused of or suspected of – but convicted of criminality ranging from falsifying research, the bribing of doctors, regulators, legislatures, and even law enforcement officials, to the marketing of drugs to children for conditions not approved of by regulators, and false advertising – just to mention a few.

One company is accused of recently manipulating the stock market as part of its inclusion in “Operation Warp Speed.” The last company simply takes US government money by the billions and produces nothing.

A normal person would not likely trust a convicted criminal – recently released from prison – walking up to their front door and injecting an unknown substance into their body claiming it protects them from some sort of disease or condition.

Yet that is precisely what the West does when they roll up their sleeves to be injected by substances created by pharmaceutical corporations repeatedly convicted of the worst possible crimes such businesses could commit.

The difference of course is a criminal walking up to you on the street raises immediate red flags.

A criminal corporation hiding behind bribed doctors with clean white coats, certificates affixed to their walls, professional, clean, and well-light [sic] examination rooms, stamps of approval from government regulators, and all the other facades of modern Western healthcare – lulls the public into a false sense of trust and safety these corporations and their products do not deserve.

If you don’t think that money—and the love of it—is driving this scamdemic, you are seriously naïve. For going along with and enforcing the Covid narrative, hospitals are receiving billions of dollars from the federal government. So are State and county governments, airline companies, nursing homes, churches, businesses, just about everyone.

In other words, these organizations and corporations are being BRIBED by the federal government with billions of taxpayer dollars (or more accurately, with Fed-created/borrowed monies) to push the Covid narrative.

This is NOT about our health and safety. In fact, our overall health and safety are seriously DECLINING every day that this phony narrative continues. This is old-fashioned Crony Capitalism (also known as Fascism) being used to create totalitarianism in what was a free constitutional republic.

For example, here in Montana, Covid positives amount to less than 1% of the population. The Covid death percentage is statistically zero at .009%. For these truly normal—or even subnormal—case numbers, the State has received almost $243 million in Covid relief monies. (Almost $24 million came into our own Flathead County.) That is over $100 million more than was requested and doubtless went to local and county governments. And that is on top of the $1.25 billion already received from the Fed. FOR WHAT?

Hospitals are empty and laying people off; government services (including the Postal Service) are slower than ever; banking institutions have closed their lobbies and shortened their work days; city councilmen, county commissioners and health boards are meeting behind closed doors and are more aloof from the citizenry than ever before; businesses are operating at half-capacity; grocery stores stay half empty; and churches are still closed. Good grief! McDonald’s and Kentucky Fried Chicken restaurants are still drive-in only. Again, FOR WHAT?

Furthermore, I’m here to tell you that the shadow government picks the president, not the people of the United States; and Donald Trump is their man for 2020. Yep! Trump will win the November election. How do I know that? Because the power elite know that if Biden wins, there would be a monstrous uprising from Christians and conservatives against the forthcoming mandatory corona vaccinations. But with Trump at the helm, they will do what they have been doing for the past four years—and especially for the past six months: NOTHING! They will sheepishly submit to the corona vaccination just like they have sheepishly submitted to wearing those stupid masks, social distancing demands, lockdowns, shutdowns, church closings, etc.

And think of this: Americans are willingly surrendering their liberties without a gun being taken. The corona vaccine will make everyone who takes it a slave of the state whether they own a gun or not.

Right now, the one world-renowned figure that is leading the resistance to this Gates/Fauci medical tyranny is Robert Kennedy Jr.

It doesn’t matter if Kennedy is the son of former U.S. Attorney General Robert Kennedy Sr. and the nephew of former President John F. Kennedy—both lifelong Democrats. He is putting the vast majority of Republicans, conservatives and evangelicals to shame in his fight to resist this medical tyranny now being waged against us.

Dr. Anthony Fauci is a “criminal” according to Robert F. Kennedy Jr., who has vowed to bring the immunologist and head of the National Institute of Allergy and Infectious Diseases (NIAID) to justice.

Fauci became a household name in recent times, but he has been a key figure in the U.S. public health sphere for decades — and according to Kennedy Jr., his criminality has had disastrous consequences.

Fauci, 79, has been the head of NIAID for a long time, becoming director in 1984. As the director, he is responsible for a large portfolio of research on established and emerging diseases. As per his NIAID bio, Fauci’s purview includes HIV/AIDS, respiratory infections, tuberculosis, malaria, Ebola, Zika and now COVID-19. He also oversees research on autoimmune disorders.

According to Robert F. Kennedy Jr., who serves as the chair of Children’s Health Defense Fund, Fauci has “committed one of the most consequential criminal conspiracies in history.”

According to Kennedy Jr., Fauci “distributes $6b annually in research grants” and he personally ensures that “studies of autism’s environmental causes never get funded.”

When in 2008 NIH’s Autism Coordinating Committee allocated $16 million to study the potential links between autism and vaccines, Kennedy Jr. says Fauci and Tom Insel, the director of the National Institute of Mental Health, killed the studies.

“They have committed one of the most consequential criminal conspiracies in history,” said Kennedy Jr. “Children’s Health Defense will bring these criminals to justice.”

The people of America (especially Christians and conservatives) have one chance—just one chance—to save this republic. They must stand up en masse—and I mean by the tens of millions—against the forthcoming mandatory coronavirus vaccination.

Already, statist “Christian” leaders are in the process of sedating Christian people into accepting the mark (or medical brand or digital tattoo or whatever symbol of state ownership Gates and Company comes up with).

And, of course, America’s larger churches and their pastors have received billions of dollars of federal tax dollars via the CARES Act and are, therefore, already bribed into compliance.

That means if Christians and conservatives are going to stand against this tyranny, they are going to have to do it without the aid and assistance from the vast majority of their pastors and church leaders. But do it they must, because there will not be a second chance if they do not.

I don’t know how to say it any plainer: To submit to the forthcoming mandatory corona vaccinations is to submit to our own enslavement.