Scientists Discover Adam’s Original White Skin Gene — Traced Back To One Man In Middle East About 10,000 Years Ago 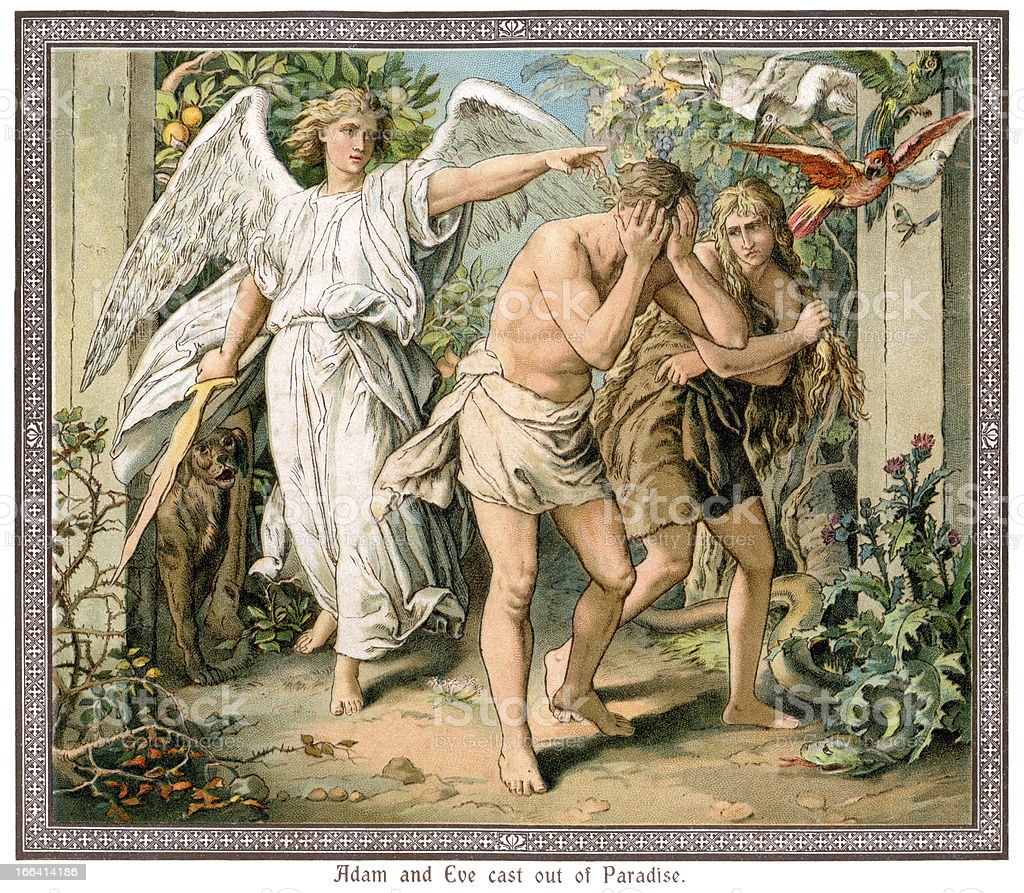 Vintage colour lithograph of Adam and Eve being cast out of Paradise, c.1880

Until recent decades all depictions of Adam & Eve, as well as Jesus, were Caucasian. Racial objections about this have been raised in very recent history along with the racial mixing and chaos that we see around us today. Along with Americans’ general falling away from faith in God and the Bible, today there is confusion and distortion of facts that, not long ago, were unquestioned.

Modern political correctness depicts Whites as the reason for all perceived problems. The defamation of “white skin” has been effective to the point of making millions of Caucasians feel guilty for being white. In fact, the White race is scheduled for extinction by certain modern calculation. It could happen unless attitudes change radically. It is due to people’s departure from faith in God, which leads them to delusions and loss of mental function.

For those who still have enough working brain cells to consider science and logic, there is genetic proof that modern racial delusions are not only silly, they are dangerous.

All instances of a genetic code that contributes to light skin color and Caucasian physical and mental characteristics in Europeans came from the same chromosome of one race according to researchers.

In a 2005 study published in the genetics journal G3, Professor Keith Cheng at Penn State University reported that one amino acid difference in the gene SLC24A5 is a key contributor to the skin color difference between Europeans and West Africans.

Lighter skin color may have provided an advantage for the better creation of vitamin D in the lesser sunlight characteristic of northern latitudes which could explain why God placed Adam in northern regions. Researchers found that all individuals from the Middle East, and North Africa who carry the A111T genetic code share a common “fingerprint” of the ancestral genetic code in the corresponding chromosomal region, indicating that all existing instances of this gene originate from the same region and from one people.

Political correctness now dominates science — and geneticists are working furiously to find common genes in all peoples to try to show a common origin. But it is neither scientific nor logical.

But all they will end up doing is proving that the Bible is correct — and that all “people” are NOT, in fact, related on the same “family tree.”

For years, “scientists” claimed white skin was an “evolutionary” adaptation to living in the north — which allowed people living there to absorb sunlight better to create Vitamin D — which is preposterous — and this study proves that it is wrong. White skin and Caucasian body types are not the result of an evolved mutation. Rather, it is the God-created genetic design of Adam’s race.

In fact, so-called “evolutionists” have already been forced to abandon their “out of Africa” single-origin hypothesis and admit that different peoples “evolved” separately — but even that will eventually fall to the facts. The various races did not evolve from one ancient single race. They were created, each with its own appearance and characteristics, by God who placed them in various parts of the world most suited to their genetic designs. The racial placements/separations worked well until the races began mixing, producing various skin shades as well as changes in physical and temperament characteristics – confusing and fouling up God’s original designs.

This study on the white skin gene generally coincides with the biblical account of Adam whose name — Aw dam — in Hebrew means “to show blood in the face” — to blush — meaning he clearly had pink or “ruddy” skin.

The Garden of Eden is generally agreed to have been situated somewhere in the Middle East — just as this study confirms where this white skin gene originated — also coinciding with the timeline of the Bible.

Other genetics studies have proven that many of the early inhabitants of the Levant had fair skin and blue eyes.

We know that white Adamic people quickly spread out from there — in all directions, taking their “white gene” with them all the way to India — which they conquered — then to the Far East where graves with tall white people with blond and red hair have been found that are thousands of years old.

The racial caste system in India was created when the white conquerors started to inter-mix with the natives — creating different shades of peoples, depending on the amount of white admixture — with the whitest at the top of those societies — we see the same phenomenon in Brazil and most other countries of Latin America.

And wherever white people have traveled, they have left this white skin gene among the native populations — which is why it is found all around the globe — but least in sub-saharan Africa where mixing least occurred.

The white skin color of Adam’s descendants is confirmed in the following Bible verses:

“My beloved is white and ruddy, the chiefest among ten thousand.” (Song of Solomon 5:10)

“Her Nazarites were purer than snow, they were whiter than milk, they were more ruddy in body than rubies, their polishing was of sapphire…” (Lamentations 4:7)

“And when the Philistine looked about, and saw David, he disdained him: for he was but a youth, and ruddy, and of a fair countenance.” (1 Samuel 17:42)