PEOPLE ARE WAKING UP TO THE THREAT, BUT THEY DON’T KNOW WHO TO APPEAL TO FOR HELP

Millions Of European and British Protestors Peacefully Take To The Streets – Starting Last Year And Continuing This Year – But Their Governments Resent Them, Police Arrest Them, And Big News Media Criticize Them.

However, when violent racist Black Lives Matter groups and ANTIFA groups protest in the streets of America – burning buildings, breaking windows, looting stores, destroying property – the government and police look the other way and big news media support them. 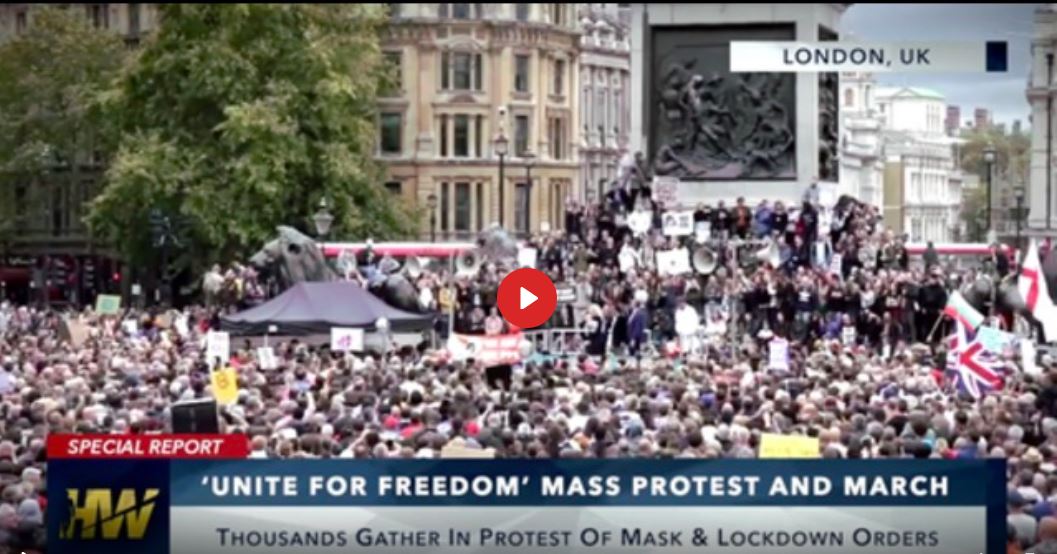 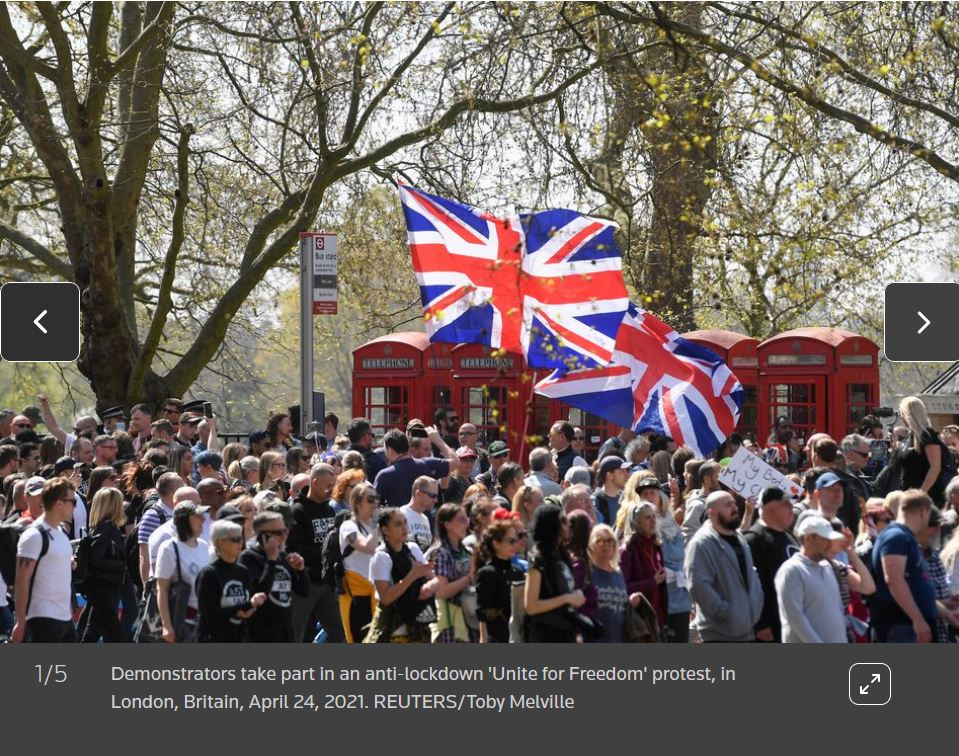 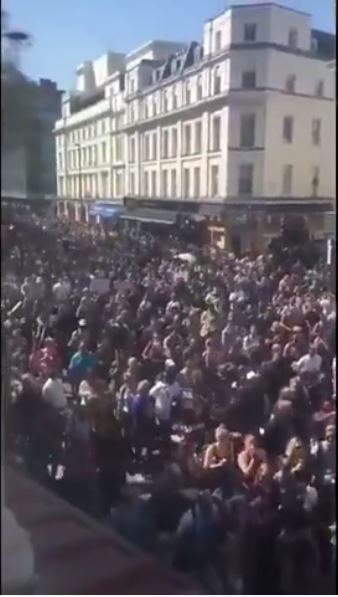 As you can see, there are millions in Europe and England who don’t like what their governments are doing. The same is true in America (and there is a lot more evidence – although most people don’t look for it – they only watch CNN, ABC, NBC, FOX, and BBC programs that support the take down of their countries). It is the same with public protests against the COVID injections. But the narrative is being controlled by the governments and the controlled news media so that most people don’t hear the truth. And perhaps most people don’t really want to hear truth.

This COVID war has been going on now for about a year. Yes, many people hate what is happening. Many people are silently refusing to get the COVID shots. Many people are sick and tired of the way the politicians are acting. Yes, many people are in fear of the governments. But they don’t know what to do about it! They are being washed over by the huge waves of lies, terror, fear, and confusion. They sit helplessly in their homes, wear their masks, close their businesses and hope that the devils in control will relent and treat them nicer.

But they won’t! The devils that are in government and have control of the media have no intention of letting up or relenting their attack on the people. They invented the fake COVID pandemic in order to scare people and make them more compliant – and ultimately to kill people by the millions with their bioweapon injections. Their goal is to eliminate a lot of people, and destroy everyone who doesn’t agree with them. They have an agenda to drastically lower the population of the Earth. And it looks like they are going to accomplish that goal since millions of people (dumb sheep) have submitted to get their jab – the bioweapon shots. Indications are that we will see a huge death toll in the coming months and years. Plus, many unborn babies will be aborted, and many of the survivors will have been made infertile so they cannot have babies.

The common people have worshiped the devils in positions of power (media, finance, government) so long that these devils now own the world. They arrogantly believe they can do anything they desire, and can perpetrate any evil they want. And they can – as long as the masses continue to worship them.

They are the .1% who own the world. Most of them are Jews. They are worshiped and obeyed by the masses. The stupid people (the 99.9%) worship their masters. In other words, a very small number of elite devils (the .1% ) have more power, more wealth, and more control than all the other 99.9% of the people. The super rich .1% are the heads of the banks, the controllers of Hollywood, the heads of governments, the CEOs of the gigantic corporations and foundations (mostly Jews). They are the billionaires – the few super rich men who created and run the systems of the world, and control them.

These are the people who have always hated Christ and declare it openly. They are heads of THE BEAST SYSTEM to which I often refer – the heads of the mega-corporations and foundations. They are the symbolic “woman” that rides and controls the dragon/serpent system symbolized in Revelation 17. They are the same people in John 8 who claimed to be the seed of Abraham, but Jesus plainly told them they were NOT Abraham’s children, but their father is the devil (meaning their religion – Judaism – hated Jesus and wanted to kill Him). Jesus also told them they “are not of God.” In 1 John 2:22-23 John clearly defined those who were “antichrist” and “liars” (those who deny that Jesus is the Christ). Jews have always denied and hated Jesus. They curse Him and say horrible things about Him in their holy book The Babylonian Talmud. These were the Jews who, when Pilate wanted to release Jesus, they demanded that he execute Him (Matthew 27:11-25).

These same antichrists are responsible for much of the false doctrine taught in the churches that have led the would-be Christians astray. Now they are mislead an confused.

Ironically, the devils in government and their elite cohorts are the very ones to whom the protestors (as seen above) appeal for help. Do you think that is wise? Does it make sense for them to appeal for help from the powers that are misleading them and enslaving them? Those who hate you and are literally killing you are hardly the ones to seek help from.

So how did people get so stupid? Why did they willingly volunteer to enslave themselves and trust and follow devils? That is the question!

The surprising answer is simple. The people of Europe and America forgot who they are. In truth they are the descendants of Abraham, Isaac, and Jacob. They are the true Israelites – but they’ve been told that they are “Gentiles” and that the Jews are the Israelites. It is a lie. Jews are usurpers and not Israelites. The Jews aren’t even Semites. The real Israelites (the true Semites) have the history and the advantages that came from their ancestry – they are those who came from the line of Abrahm, Isaac, and Jacob – who received the laws and instructions from God. Thus, they are the ones who were the pioneers, the inventors, the teachers, the people to whom the Bible was written. They profited from the Word of God and developed cultures whose people led the world in knowledge, reason, and all advancements.

But our western ancestors weren’t loyal to their heritage, and eventually began succumbing to Pagan and Jewish influence. This was their downfall. They eventually not only forgot who they are, they also forgot who their true God is, which means they began losing connection with the God of Israel and his laws – like the 10 Commandments. And by the same token, they were being given wrong information about God’s Son, Jesus, so that they actually began worshiping a wrong god, and a wrong christ due to the false prophets in the “Judeo” churches teaching wrong doctrine.

The churches/preachers today will say “we teach from the Bible.” It is true the churches use the Bible along with pagan writings, but the men who translated the modern Bibles into English were hirelings of the church world which got its beginnings in Pagan Rome. So the interpretations and doctrines have been twisted and contrived by the Romanish churches so they are terribly distorted. They believe in ridiculous tales like flying off to an outer space “heaven,” most of mankind being tortured forever in a burning “hell,” and a supernatural immortal “Devil” that is supposed to be responsible for all the evil men do, and God lets him ravage the Earth. And there are numerous similarly ridiculous unbiblical doctrines embraced by the churches. Thus the preachers mislead and confuse the churchgoers to the end that they never hear what God’s Word truly says to them. But Jesus said this to the churches:

21. Not every one that says to me, Lord, Lord, shall enter into the kingship of heaven; but he that does the will of my Father which is in the heavens.

23. And then will I profess to them, I never knew you: depart from me, you that work lawlessness.

The Jews commanded Peter not to teach about Jesus. Peter replied:

29. Then Peter and the other apostles answered and said, We ought to obey God rather than men.

30. The God of our fathers raised up Jesus, whom you slew and hanged on a tree.

The result of all this is that most people who think they are following Christ and say to Him “Lord, Lord,” are actually appealing to a different christ, one made up and adopted by the churches which originated out of Rome and are led by Jews. This means that people are not being taught truth, and this leaves them without God’s word. And that is why “Western Civilization” has largely been made stupid. They worship false gods, or they ignore God altogether. They’ve been misled by this combination of devils in government, devils in banking and finance (usury), devils in the news media, and false prophets in the “Judeo” churches. Thus, the people don’t know who to appeal to because they only know false gods and false christs. They don’t know the only source they can really trust: God! They don’t appeal to Him because they don’t know Him or believe in Him. Thus they worship devils in high positions who they see as their saviors. American patriots worship devils in Washington DC. The same is true with Europeans who worship the devils that rule their nations.

So … millions of people take to the streets protesting … to who? To devils in high positions. Not to the true God who is the only One who can save them.