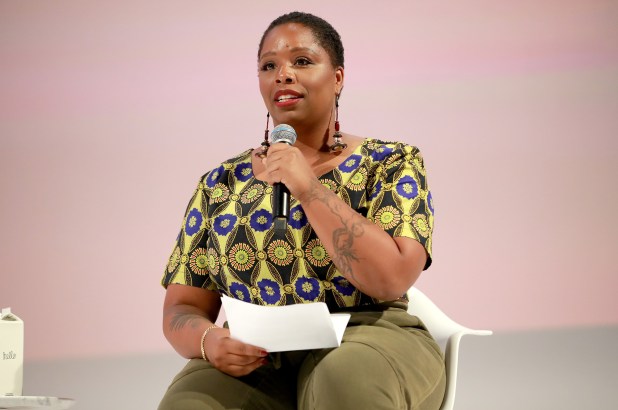 Black Lives Matter co-founder Patrisse Cullors said in a newly surfaced video from 2015 that she and her fellow organizers are “trained Marxists” – making clear their movement’s ideological foundation.

Cullors, 36, was the protégé of Eric Mann, fellow Marxist and teacher, and spent years absorbing the Marxist-Leninist ideology that shaped her worldview.

“The first thing, I think, is that we actually do have an ideological frame. Myself and Alicia in particular are trained organizers,” she said, referring to BLM co-founder Alicia Garza (Travon Martin’s mother).

“We are trained Marxists. We are super-versed on, sort of, ideological theories. And I think that what we really tried to do is build a movement that could be utilized by many, many black folk,” Cullors added in the interview with Jared Ball of The Real News Network.

While promoting her book “When They Call You a Terrorist: A Black Lives Matter Memoir” in 2018, Cullors described her introduction to and support for Marxist ideology.

She described to Democracy Now! how she became a trained organizer with the Labor/Community Strategy Center, which she called her “first political home” under the mentorship of Mann, its director, Breitbart reported.

The center, which describes its philosophy as “an urban experiment,” uses grassroots organization to “focus on Black and Latino communities with deep historical ties to the long history of anti-colonial, anti-imperialist, pro-communist resistance to the US empire,” according to the outlet.

It also expresses its appreciation for the work of the US Communist Party, “especially Black communists,” as well as its support for “the great work of the Black Panther Party, the American Indian Movement, Young Lords, Brown Berets, and the great revolutionary rainbow experiments of the 1970s,” Breitbart reported.

MARXISM IS PROFITABLE (FOR IT’S LEADERS) – NOT UNLIKE CAPITALISM

Marxism’s leaders are political profiteers not unlike Capitalism’s leaders. Marxist leaders claim to be champions for equality, but oddly enough the leaders end up with all the wealth. They claim that capitalists profit by cheating the people, which is true. But Marxists do the same thing. After all, Karl Marx’s seminal work, his book Das Kapital (about Capitalism), complained about the west’s elite class of super rich. But it turns out that Marxist leaders do the same thing with loyal followers struggling in slavery and poverty.

The Beast System engenders and encompasses several philosophies, all of which have the common feature of enriching the few at the top while enslaving the many at the bottom. A rotten system is rotten regardless what it calls itself. It still stinks.

For example Patrisse Cullors and husband Janaya Khan appear to be living the high life from the profits derived from Black Lives Matter – an admitted Marxist organization.

As protests broke out across the country in the name of Black Lives Matter, the group’s co-founders went on a real estate-buying binge, snagging four high-end homes for $3.2 million in the US alone, according to property records.

Patrisse Khan-Cullors, 37, also eyed property in the Bahamas at an ultra-exclusive resort where Justin Timberlake and Tiger Woods both have homes, The luxury apartments and townhouses at the beachfront Albany resort outside Nassau are priced between $5 million and $20 million, according to a local agent.

The self-described Marxist last month purchased a $1.4 million home on a secluded road a short drive from Malibu in Los Angeles, according to a report. The 2,370 square-foot property features “soaring ceilings, skylights and plenty of windows” with canyon views. The Topanga Canyon homestead, which includes two houses on a quarter acre, is just one of three homes Khan-Cullors owns in the Los Angeles area, public records show.

Last year, Khan-Cullors and spouse Janaya Khan ventured to Georgia to acquire a fourth home — a “custom ranch” on 3.2 rural acres in Conyers featuring a private airplane hangar with a studio apartment above it, and the use of a 2,500-foot “paved/grass” community runway that can accommodate small airplanes.

The three-bedroom, two-bath house, about 30 minutes from Atlanta, has an indoor swimming pool and a separate “RV shop” that can accommodate the repair of a mobile home or small aircraft, according to the real estate listing.

In October, the activist signed “a multi-platform” deal with Warner Bros. Television Group to help produce content for “black voices who have been historically marginalized,” she said in a statement.

It is not known how much Khan-Cullors received in compensation in either deal.

Khan-Cullors began her buying spree in L.A. in 2016, a few years after the civil rights movement she started from a hashtag — #blacklivesmatter — with fellow activists Alicia Garza and Opal Tometi began to gain traction around the world.

That year, she bought a three-bedroom, 1.5-bathroom home in Inglewood for $510,000. It is now worth nearly $800,000. Khan-Cullors added her wife, the co-founder of Black Lives Movement in Canada, to the deed in a family trust last year. The couple married in 2016.

Two years later, in 2018, Khan-Cullors purchased a four-bedroom home in South Los Angeles, a multi-ethnic neighborhood. Khan-Cullors paid $590,000 for the 1,725 square-foot home, although the price has since climbed to $720,000, according to public records.

Three of the homes were bought in Khan-Cullors’ name, and the Topanga Canyon property was purchased under a limited liability company that she controls, according to public records.

Last year, Khan-Cullors and Khan were spotted in the Bahamas looking for a unit at the Albany, a real estate source who did not want to be identified. The elite enclave is laid out on “600 ocean-side acres” and features a private marina and designer golf course. Current homes for sale include a nearly 8,000 square-foot, six-bedroom townhouse with a media room and marina views. The price is only available upon request, according to the resort’s website.

Cullors claims to have started out in “the hard-scrabble Van Nuys neighborhood in L.A. where she spent her childhood with two brothers and a younger sister.” Khan-Cullors embraced activism and Marxism at a young age. “It started the year I turned twelve,” she writes. “That was the year that I learned that being black and poor defined me more than being bright and hopeful and ready.”

While learning the mechanisms of Marx she also learned about organizing and recruiting followers who were willing to protest, riot, loot, and make headlines. They rode the Black Lives movement, sponsored by super wealthy financiers of the likes of billionaire George Soros, who helped put them on the road to profit through deceit, politics, and news media – all of which were set up to disenfranchise the current population of mostly White workers.

But she didn’t rise to national prominence until 2013, when she and two other activists protested the not-guilty verdict against George Zimmerman, who shot dead Trayvon Martin, an unarmed black teenager in Florida.

Black Lives Matter protests erupted again in 2020 after the May killing of George Floyd, who died after a Minneapolis police officer knelt on his neck during his arrest.

Donations and pledges from corporations and individuals poured into the movement at that point. In February, the BLM non-profit co-founded by Khan-Cullors told the AP that they took in $90 million in 2020, with $21.7 million committed to grant funding and helping 30 black-led groups across the country.

Black Lives Matter leaders would not specify how much money they took in from prominent donors, according to the AP report.

Founded by Khan-Cullors and another activist, Kailee Scales, the non-profit Oakland, Calif.-based BLM Global Network Foundation was incorporated in 2017 and claims to have chapters throughout the US, UK and Canada, and a mission “to eradicate White supremacy and build power to intervene in violence inflicted on Black communities.” The group does not have a federal tax exemption and donations are filtered through ActBlue Charities and Thousand Currents, two non-profits that manage the cash.

At the same time that the Khan-Cullors incorporated the non-profit, she also set up the similarly named BLM Global Network, a for-profit which is not required to disclose how much it spends or pays its executives.

So … obviously those at the pinnacle of the wealth/power pyramid, above the level of Cullors, have decided to rush ahead and tear down western society and lower the standard of life here. Those elite power brokers are using tactics similar to those used against the South after the War Between The States. It was called “Reconstruction” (1865-1877). The south had lost the war, but northern leaders (industrialists) wanted to punish the south more extensively. So by force they put Blacks in charge of Southern states politics and positions of power. It crushed the Whites. The result was that life in the South became unbearable. The operation hit bottom in a few years and the south managed to start turning back to more capable government – i.e., White politicians and managers.

Anyway, it appears something like “Reconstruction” is taking place again today in America. White population today finds itself disempowered and dumbed-down to a state of incompetence. The crowning insult is the outrageous fake COVID “pandemic” – a White-based farce which is made up out of whole cloth like a movie script. This, and other degrading manipulations which have been happily adopted by stupid Whites, are in the process of turning western culture on its head while Black Lives Matter activists, along with ANTIFA activists, are living (at least temporarily) high on the hog.

In short, there is little if any real difference between Capitalism and Marxism. They are both branches of the Beast System – an overall term for godless government by man excluding God.

White culture (which has corrupted itself) is in decay. It can’t last long, but while it continues immeasurable misery and damage is being felt. The purpose behind those facilitating the overthrow western society is to consolidate all power and wealth into the hands of a few billionaire Merchants Of The Earth (like Bill Gates).

If you think this plan is outrageous, you are right. But it is has been working in the West for a long time. The West has fallen into decay and the population has become stupid and weak – easy to manipulate. How did this happen? It happened the way all empires in history fell into decay. They deleted God out of their thinking and plans. This decision automatically turns men into idiots – making them “the tail” while their enemies became “the head.”

43. The stranger that is among you shall get up above you very high; and you shall come down very low.

45. Moreover all these curses shall come upon you, and shall pursue you, and overtake you, till you are destroyed; because you hearkened not to the voice of Yahweh your God, to keep his commandments and his statutes which He commanded you:

Over the years Americans and Europeans have for the most part been put to sleep due being guided by godless political and educational leaders. This is why the West is now in decline and in the process of dying. There are unavoidable consequences for ignoring and abandoning God. This is the only comprehensive answer for what is happening today in the West. The people no longer know or care about truth. They speak of “God,” but they don’t know Him.

21. Not every one that says to Me, Lord, Lord, shall enter into the kingship of heaven; but he that does the will of my Father which is in heaven.

23. And then will I declare to them, I never knew you: depart from Me, you that work lawlessness.