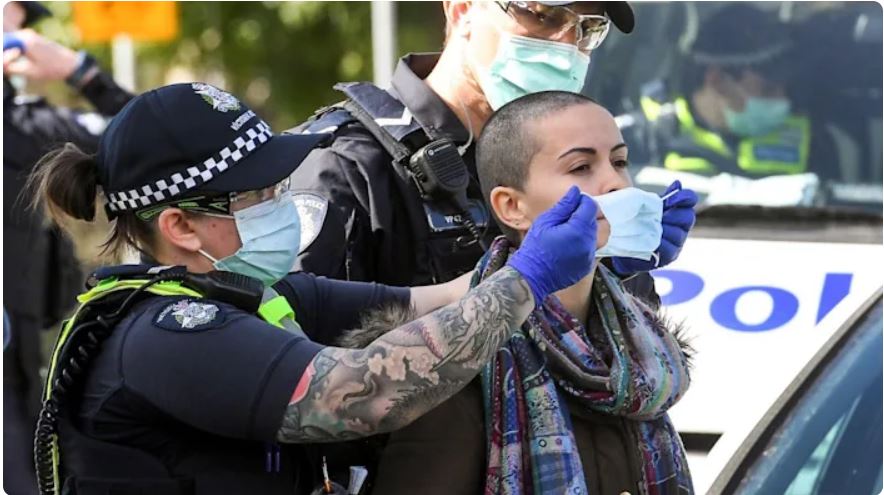 As huge groups of protestors demonstrate in nations around the world the governments and most media outlets are showing their contempt for the people by hiding the truth. The politicians, police, military, and the corporate heads are obviously either incredibly stupid or incredibly wicked. That’s the message that is beginning to be realized by the public. To the extent that the nature of the Beast System is being exposed and discovered by the people this whole conflict could lead to a great blessing – an awakening of the people of the world.

Through it all, there is a message that is unmistakably sinking into the minds of people who are being hurt, financially destroyed, and killed by the politicians and the medical centers. The message is that those who are in positions of power are enemies of the citizens – like captors are the enemies of the captives. This comes as a surprise to a lot of Americans who, up to this time, have always tried to be patriotic and thankful for their governments. They mistakenly assumed that governments are instituted to protect the public and facilitate their pursuit of happiness (like the propaganda claims). Now, for over a year, through an unexpected quirk of fate (I believe it is God opening people’s eyes by exposing the enemy) the general revelation that the Beast System (i.e., government system) is, and has always been, run by devils who deceive and enslave the common people.

The devils in power (bankers and politicians – the heads of the Beast System) have gotten away with their clever scheme for a long time. Their monstrous, anti-Christ scheme has allowed them to amass mountains of wealth and unimaginable power that has given them total control over citizens. The common people simply could not imagine a system so wicked that has raged against them all these years – the same institutions that claimed to be protecting them. But now the truth is being revealed, and people are beginning to open their eyes and see that their “leaders” are intentionally hurting and destroying them. Huge protests are organized in countries around the world. Most of the protestors still hope to get their governments to be nice to them, but that will not happen. Governments are not for the purpose of being nice to their citizens – and that is what is being exposed. It is a shame that it has taken this extreme tragedy to start waking people up. Now at least a lot of people have a chance to learn the truth about the Beast Systems of men.

Apparently the devils who control the levers of the nations have become so arrogant and ambitious that it appears that they have finally gone too far and are now showing their true colors. God is pulling back the curtain to expose them, like in the story of The Wizard Of Oz, allowing people to see their lies and true motives. They are the enemies of God and of the people. They lie, steal, murder, and destroy people. The great and powerful devils are openly exposing themselves. They are stupidly flaunting their nefarious machinations. And who could have foreseen how this would play out? They are openly exposing themselves. They stupidly invented a non-existent disease – a “pandemic,” and announced mandates based on ridiculous false claims. And wicked leaders in high places are openly demanding that people comply to their absurd demands to voluntarily submit to medical procedures that are killing and injuring people by the millions. Apparently this is what it has taken for people to begin waking up and realizing the mess they had blindly allowed themselves to get into.

Now workers, by the millions, are choosing to quit their jobs where employers are demanding they must be vaccinate with the murderous jab. Now there are millions who are walking away, choosing to lose their income rather than comply with the devils trying to force them  to destroy themselves.

The demented devils in power thought they could tell the people to injure and kill themselves and everyone would thoughtlessly comply.  And it has worked for millions who did what was expected – and God only knows what the future holds for the dummies who bowed down and took the kill shot.

Isaiah explained how God did something similar to wake up Israelites over two millennia ago. God brought the forces of Assyria upon Israelites who had chosen to reject God and they became blind and compliant to a Beast System:

13. For he (the Assyrian) says, “By the strength of my and by my wisdom I have done it, for I had discernment: and I have removed their prepared boundaries of the people (the sinful Israelites). So I plundered and came down, so like a mighty one I came down upon the inhabitants:

14. And my hand has found as a nest the riches of the people to gather eggs that are left. I gathered all the land; and there was none that moved the wing, or opened the mouth, or peeped.”

If Israel had not rebelled against God they would have enjoyed his protection. But Israel had rejected God’s Kingship, and they went whoring after the systems of the godless nations around them (1 Samuel 8). They had become callous and blind – making bad choices. Destroying themselves and their future descendants. So for Israel’s own good, as children sometimes require punishment to correct them, God used Assyria to shake them awake. And the Assyrians arrogantly assumed that their conquest was by their own brilliance and by Israel’s weakness. None of them even protested.

Well, that is very similar to what is happening to America. But thankfully, suddenly a lot of Americans are protesting. Yes, many have chosen to “not move a wing, open their mouths, or peep.” They are the ones who are beyond saving.They are choosing to obediently walk into the enemy’s slaughterhouse. But thank God that many others are flapping their wings and loudly peeping – and it can lead to them learning a lot more. In the process the wicked motives of the Beast System (the US Government system) is being exposed. The devils are demanding that people must wear face masks that can’t protect them and they actually damage the wearers (a fact that every scientist knows), also demanding that everyone must get shots that can kill them and they protect no one, and the devils want people to keep getting more and more booster shots until billions of them, worldwide, are killed.

It is causing the Beast System to look bad to a people who have blindly trusted and worshiped it. Now maybe people will inquire of God and learn that there is another system – a system that is perfect – a system that God offers that will bless us and lead us into truth and freedom. The churches have not taught this, and it has left churchgoers vulnerable to the Beast’s lies.