80% OF DEATHS (FALSELY CALLED “COVID”) ARE IN THE “VACCINATED” PEOPLE 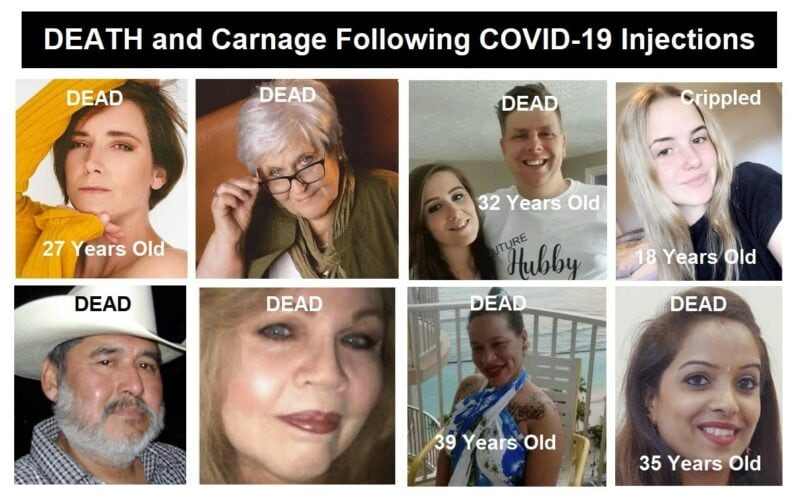 A deadly combination of fraudulent science, institutional coercion, bribery, Big Tech censorship, government force and media propaganda are proving deadly to Americans. There is NO real-world data showing that covid-19 actually exists. It was created as a computer construct and exists only in computer programs in biotech laboratories, and in the government-written scripts parroted in TV newsrooms. “COVID” does not exist except in the minds of the deranged and the devils. It is like the belief that people had at the time of the Bubonic Plague, when no one knew what was causing it. Turns out that it was caused by biting fleas carried by rats. The fleas were biting people and infecting them with the disease. But people assumed that rats were the cause. People saw rats in piles of burlap bags and assumed that rats were generated by burlap bags. Yeah, sounds ludicrous doesn’t it? But it isn’t any more ludicrous than the “COVID” claims of Tony Fauci, Bill Gates, and most doctors today. Think about it.

Right now, hospital data from the United Kingdom is shocking the world, providing serious evidence of vaccine-induced death. In the UK, up to 80 percent of so-called “COVID” deaths are currently in people who have received the jab. Deaths blamed on COVID across the UK are now 3,000 percent more frequent than they were at the same time a year ago when the population was “unvaccinated.” Still, Fauci, Biden and hospitals keep saying that the cure for the problem cause by the jabs is to give people more jabs.

This absurd tragedy could not happen to any people who were not already brain dead and helpless – a people who have been programmed to trust rulers who spend billions to formulate poisons to kill the people. Stupidity cannot be cured. Most Americans are infected with stupidity. They are slaves who think they are free.

“None are more hopelessly enslaved than those who falsely believe they are free.”

There are people in positions of power conspiring to kill you! Shouldn’t you at least be interested in finding out who they are and why they want you dead – and what you can do about it?

As simple and basic as that sounds, today we see a nation of people who don’t have the gumption to even ask the question: “What is this” and “Why is it happening.” Americans have been reduced to idiots who will walk voluntarily into the death chamber and turn the knob to release the poison gas upon themselves.

If you don’t see that there is something terribly wrong, then you are either brainless or in a trance. In either case, you will be beyond help when they walk you into the clinic to get your jab. Like the foolish virgins of  Matthew 25, it will be too late for you.