Who Is Killing Who In Ukraine?

Listen to these Ukrainian residents of Mariupol tell who is shooting them. The right wing “Azov” is part of the Ukrainian military,  not Russian. The Russians are trying to help the people, not targeting them.

Ukrainians are trying to escape the country because the Ukrainian military is killing Ukrainians and then blaming it on Russia. For instance here are some Ukrainians who escaped from Mariupol. The western media claimed that they were being targeted by Russians. But the people themselves had a different story. See the above video as the people explain that Russian military is protecting them and helping them while Zelensky and the western press tell us the exact opposite.

Watch Zelensky admit that Azov militia is incorporated into Ukraine’s military. Thus, the Ukrainian military is killing its own people and blaming it on Russia.

Recent killings occurred in Mariupol the Azov Battalion headquarters. Azov is part of the Ukrainian National Guard subordinate to the Ukrainian Interior Ministry. Mariupol is in the southern part of eastern Ukraine called Donbass – on the border between Ukraine and Russia. Azov fighters are anti-Russian. They have been killing pro-Russian Ukrainians of the Donbass region for at least 8 years. Why hasn’t western media said anything about it during those years when the Ukrainian government was murdering thousands of it’s own citizens in the Donbass region? The Azov fighters are nationalists and far-right radicals. Russia considers them “terrorists.”

The anti-Russian Azov army is named for the Sea of Azov. Mariupol is situated on the shore of the Sea of Azov. The Azov fighters have been an arm of the Ukrainian army in its fight against pro-Russian Ukrainians. 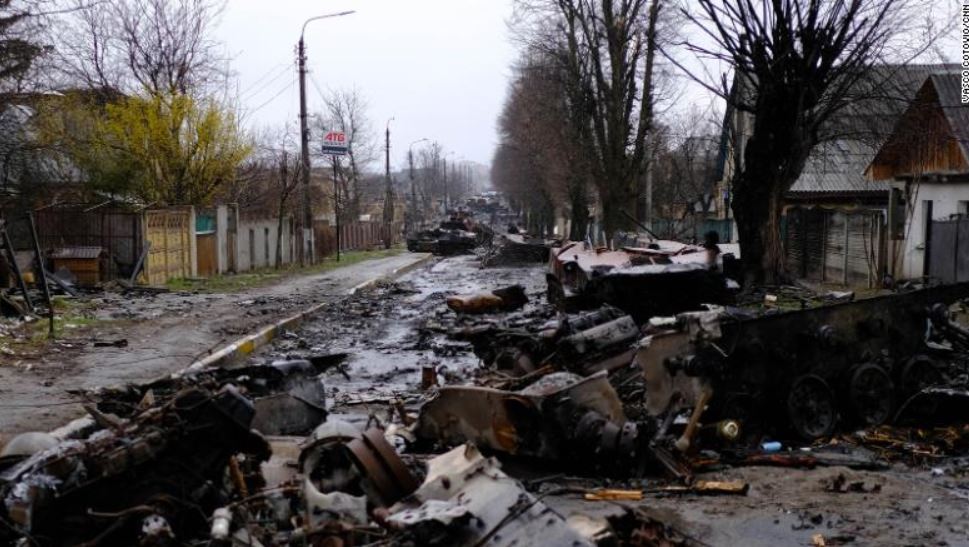 Months or years-old aged and rusted weckage presented by CNN to be a street in Bucha in the Donbass region where Ukraine military has warring with eastern Ukrainians for 8 or more years. CNN claimed the scene is what is left of a Russian tank convoy destroyed less than a week earlier. CNN is unashamed to produce such obvious lies and propaganda. Russia had voluntarily left Bachu days before Ukraine leader proclaimed that 400 people had been massacred and ritually raped and executed by Russians. It turns out that the people were killed by Azov anti-Russian Ukrainians.

The latest false flag operation in Ukraine was in Bucha just outside of Kyiv. Bodies were placed (staged) along streets and in back yards – some in pits dug as mass graves. Yeah, the dumb people are supposed to believe that “cruel Russians” bury their victims after killing them. Several of the unarmed bodies (if they really were dead) had their hands tied behind their backs with flimsy white cloth to make it look like the Russians executed them for fun – after they raped the women repeatedly. But the people who were there say it was the Ukrainian military shooting their own citizens to make a planned scene for western news. President Biden made a special speech calling Putin a “war criminal” using the false flag “Bucha massacre” to condemn Putin.

The Kremlin for its part has called the allegations over Bucha “without foundation” and an attempt to “smear” the Russian army, with a spokesman dismissing the charge of mass killings as a “monstrous forgery.”

“It is a simply a well-directed – but tragic – show,” Kremlin spokesman Dimitry Peskov responded at a press conference. “It is a forgery aimed at denigrating the Russian army – and it will not work. We once again urge the international community: detach yourself from such emotional perceptions and think with your head.” He added: “Compare the facts and understand what a monstrous forgery we are dealing with.” Further Peskov called Biden’s war crimes remarks directed at Putin “unacceptable and unworthy” of a US leader.

UNITED NATIONS, April 5. /TASS/. Russia’s envoy to the UN Vasily Nebenzya on Tuesday said no civilians were hurt in Ukraine’s Bucha while Russian troops were stationed there. People were free to move around the city and use mobile phones, Vasily Nebenzya also noted.

“All units of the Russian armed forces completely withdrew from Bucha, as a goodwill gesture, on March 30, the day after the in-person round of talks between Russia and Ukraine in Turkey,” he said at a UN Security Council meeting. “Not a single civilian suffered any violent attacks while the city was under the control of Russian troops.”

“People were free to move around the city and use mobile phones,” the diplomat continued. “Exits from the city were not blocked.”

The West’s system of mainstream media and politicians is the most wicked, unconscionable, depraved group of liars in the world. They fully personify the definition of “devils.” Anyone who trusts that system is crazy. 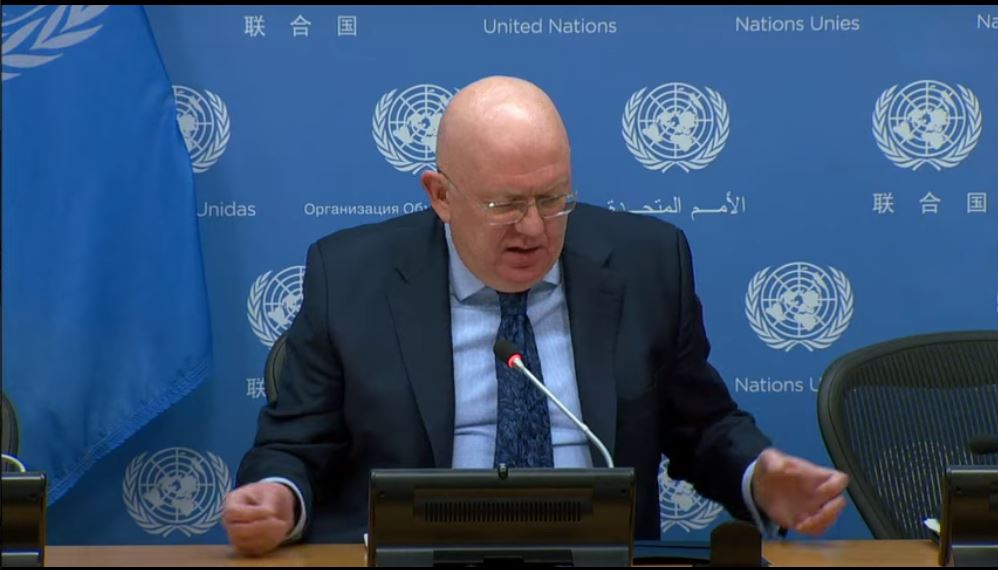 Text of the press conference

The clear evidence is explicit and undisguised. The psychopathic and blood-thirsty politicians, the murderous hirelings of the news media – i.e., that whole system summarily murders millions by mandating deadly vaccines, inciting and financing wars, and by constantly lying and misdirecting the public. They brazenly expose their treachery without concern or shame.

This is all done in plain view. Consequently no one today can say that this was hid from him. The system is openly wicked and exposed for the whole world to see, and anyone who is not thoroughly convinced and aware that the modern Beast System of government and its news media are the embodiment of evil – the real and worst enemies of the people – then those individuals are willfully self-blinded to that which is obvious to anyone with eyes to see.

“We are all born ignorant, but one must work hard to remain stupid.”

10. And with every deceit of unrighteousness in them that are being destroyed because they receive not the love of the truth that they might be saved.
11. And for this cause God is sending them a delusion, to believe what is false:
12. That those all might be judged who believe not the truth, but have pleasure in unrighteousness.